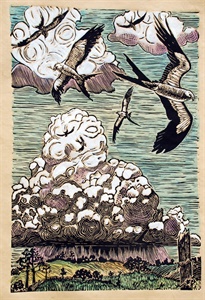 Three pair of kites were swirling in a meadow near my Alachua home. I stopped the car to photograph them and they dropped down low and circled above me to check me out. Wow!(4 originals left) 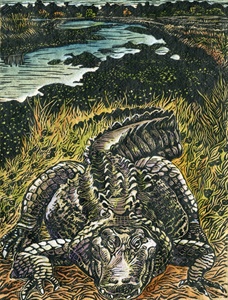 I photographed her on the bank of Alachua Sink on Paines Prairie. Flood waters were receding and the gators gorged on fish caught in the shallows.
ORIGINAL SOLD OUT 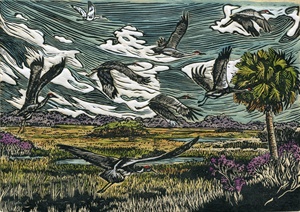 Sandhill Cranes arrive on Paines Prairie by the thousands around Thanksgiving each year. I create series of 100 prints and all prints are considered originals.(5 original left) 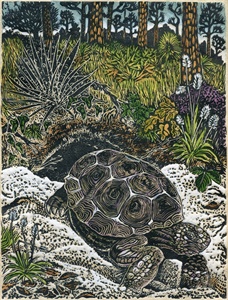 I have loved these reptiles since I first met them as a child. I created the image from numerous drawings and photos from San Felasco Hammock and Morningside Nature Center in (7 left)Gainesville, Florida. 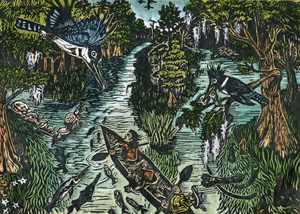 I canoe this river about once a month to watch the seasonal changes take place. Getzen, the storyteller, my grandson, Justin and I are in the boat at Mill Spring and "Turtle Corner".

Leslie Peebles is an ardent environmentalist and naturalist who connects her audience to the flora and fauna of Florida. Florida's vanishing wilderness, from the everglades to the Okefenoke swamp, has become a big source of inspiration for Leslie's work. Her primary medium is printmaking; wood-cut and lino-cut relief print, letterpress and collagraph. Carved blocks, cast letters and sealed collages are inked and "impressed" into paper on an etching press or letterpress machine.

Nature serves as a living metaphor for the connectedness of all things; internal, external and universal. Land, trees and animals projections and identifiers of self and universe. The atmospheric layering of the pieces evokes the multi-dimentional layering of our experience and understanding of reality.

Leslie Peebles was born in Hackensack, New Jersey in 1959, lived there in the suburbs of New York City until 1971 when she and her family moved to Suwannee County, Florida where her father became a Broiler Chicken Producer for Gold Kist. Living on the 80 acre farm near the Suwannee River fostered a deep love, respect and fascination for nature. This experience, combined with few social opportunities and an outstanding High School Art Teacher, Jeffery Ann Smart Baisdon, led Ms. Peebles to grow and develop into a young artist.

Leslie attended The University of the South in Sewanee Tennessee, married after her junior year and received her B.A. in Studio Art from Newcomb College in New Orleans in 1981. Leslie moved to Gainesville in 1985 and, while raising three children, received an M.A. in Art Education from U.F. in 1994 and began her teaching career.

Inspired by teaching linoleum block printmaking to her students, Ms. Peebles began creating her own art using this medium. She joined the Center for Modern Art in Gainesville in 1996 and began showing with them in group shows and alternative art spaces. She joined Sweetwater Print Cooperative in 1999 which broadened her printmaking experiences, provided crucial equipment and space for her use and helped Ms. Peebles become an emerging regional artist.